My dear friends, this is a long blog. It’s also an interesting one. If you want the truly exciting stories, I advise that you don’t just skim through and look at the pictures. The more gripping stories have no pictures. That’s the beauty – and the trepidation – of raw experience. It consists of more than what the senses can discern.

I woke up to news of a terrorist attack on the subway. Someone set off what the press called a “bucket bomb” – literally a bomb concealed in a bucket. It the fifth attack to occur in London that year. Fortunately no one died. 29 people were injured.

Since the subway was still open and two terrorist attacks in one day seemed unlikely, I chose to travel the way I had planned. The London underground was open and commuters were calm. The only indication of terrorism was a consistent announcement over the loudspeaker that Parson’s Green, the station where the attack had occurred, was closed that day.

My suitcase had experienced some issues at the airport, so my first stop in London was a luggage store. Yes, I know, it was very exciting. They were not able to fix it long term, but they did show me how to keep the handle up, which is all that matters.

This luggage store just so happened to be on a street that is world famous…Baker Street. It occurred to me on the way that I should check out what is actually on 221B Baker Street. So after visiting the luggage store, I left my luggage with them for awhile while I went to…

You guessed it – a Sherlock Holmes Museum. For 15 GBP, fans can see a replica of what Holmes’ apartment might have been like. Here’s a glimpse of the inside and me in a deerstalker cap:

I got my fish and chips to go because the sit down menu cost way more than the carry out menu. Apparently that’s a thing in London. I took the subway to my next stop, and ate my fish and chips on the steps close to the ticket office, looking out at the bustle of London and feeding some chips to a flock of pigeons.

Here’s a picture of what I ate. You can see the cod barely peeking out underneath the fries–excuse me, the chips:

Not exactly pretty, I know, but it doesn’t have to be pretty to be good. I’ve never had real fish and chips before. This was absolutely delicious. And I don’t even like seafood.

I walked into the House of Parliament ticket office. As soon as I entered the doors I observed a security checkpoint. There was also a trashcan. I dumped the leftovers of my meal into the trashcan. Two security guards immediately retrieved it. One shook her head at me. “What?” I asked.

“What were you thinking putting a mysterious bag into a trash can in a government building on a day like today?”

I blinked and gave her a blank stare. I knew she was referring to the terrorist attack, but it took me a little bit of time to realize that they thought my restaurant leftovers might be a bomb.

“I thought this was the ticket office,” I finally said.

“Nope, that’s down the street.”

I believe I entered a highly regulated government building by mistake. Considering the suspicion of the guards, I didn’t stay long to find out.

And a view of a portion of Westminster Hall on the inside:

I spent a few hours in there. By the time I finished it was around 5:30 pm. I had planned to get my luggage from the store before it closed at 6 pm, so I left. Unfortunately, I could not find the right route on the subway and missed closing time at the store. It took me quite awhile to find my way back to the apartment of my hosts, Vitalina and Igor, but thanks to Google Maps and well marked Subway maps, I did so successfully. Vitalina offered me pasta with homemade pesto. We had a nice chat. She was very kind to me during my stay.

The next day, a Saturday, I wanted to set out to do more site seeing but felt it was more important to take care of some research and future trip planning at the apartment. Unfortunately, I did not make it outside until sometime in the afternoon. I did, however, get a chance to tour the Tower of London for about two hours before it closed.

Right next to the Tower of London is the Tower Bridge over the River Thames: 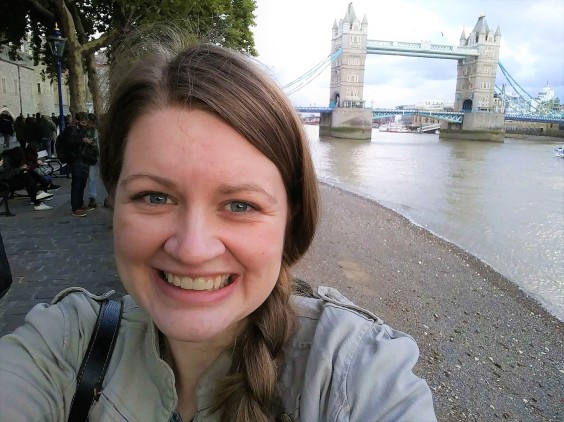 And very modern looking Shard and surrounding buildings in contrast: 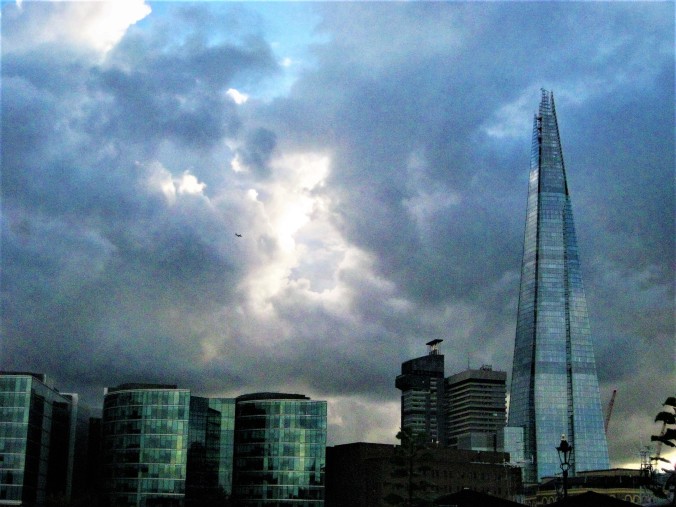 I rather loved the way the light broke through the clouds here. As novice photographers and dinky cameras often do, we failed to capture its full beauty, but here, perhaps we came the closest:

I also like the contrast between the old and new buildings in this glimpse of the shard from inside the Tower of London. 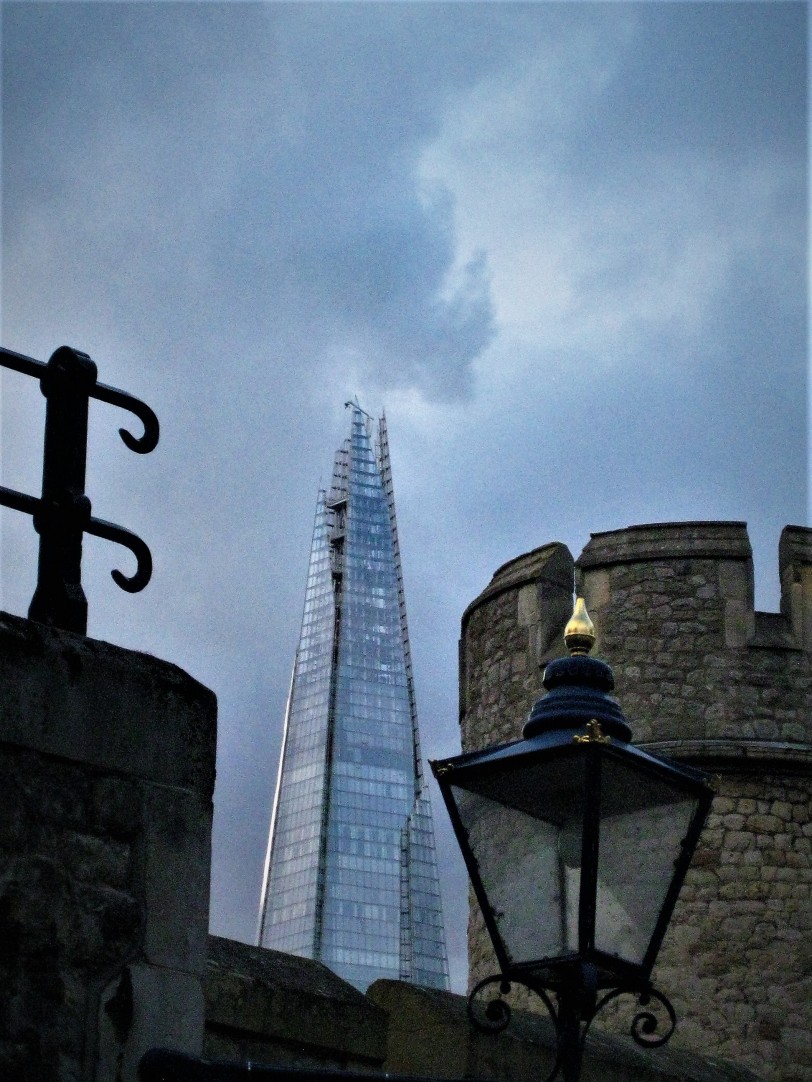 After taking photos of the sites, I took a tube to the West End where one of my dreams was fulfilled. I saw Les Miserables at the Queen’s Theatre. That’s the original location for the first London premiere. This show has been running nonstop for almost exactly 32 years! It opened just one month before I was born.

I had intended to see it the night I arrived in London, but due to delays had missed it. I am in the process of seeking a refund for that ticket. In the meantime, I didn’t want to miss out on an amazing opportunity, so I bought another ticket.

Here’s my face just outside the theatre:

And my view from the balcony before the show began:

The show was absolutely worth it. I was especially impressed by Jean Val Jean, Eponine and little Gavroche. Their voices were beautiful and their performances striking and dynamic. I had never seen the musical live before; it moved just as quickly as the feature film due to a wonderful revolving stage which enabled prop masters to create scenes for the actors astonishingly fast. It was fascinating to watch.

The following day was Sunday. I traveled to a Latter-Day-Saint church in the historic Hyde Park building in London. This is where one of only two existing Young Single Adult wards in England is located (the other is in Manchester).

Unfortunately, due to a miscalculation about subway and walking times, I was late to Sacrament Meeting. I arrived at the time that the sacrament was being passed. I discovered upon my arrival that there was a visitor center just outside the chapel doors, and due to a history of rowdiness with previous visitors, the bishopric had ruled that they would not pass the Sacrament to people in the hall.

After Sacrament I asked the bishop if there was another way I could get the Sacrament. He said there wasn’t. There were no churches in the area who met at a later time and he could not allow priesthood to bless it just for me. I explained my point of view and asked if he could make an exception in my case. He said he could not.

The burden and distress I felt at that moment was more than I could have anticipated. In fact, it was fairly overwhelming. I went to the bathroom to cry. A kind lady followed  me, an elderly missionary. Though she tried to comfort me, I would not be comforted.

I’m being uncomfortably vulnerable here: despite attempts to collect myself at various points, I found myself crying throughout the entire duration of church and a good deal afterwards. I missed most of Gospel Doctrine but I attended Relief Society. I had planned to meet people and make friends, but due to my emotional state I could not do so.

I don’t know that I wish to fully explain the reasons behind my acute stress and anxiety. Emotions don’t really have reasons, after all. However, those of you that are LDS might understand some of the sadness associated being unable to take the Sacrament, whatever the cause of the inability may be. The Sacrament is an opportunity to reflect, change, and renew one’s faith in Christ. It is a gift wherein one receives spiritual strength for the coming week. The day following I was to go to Scotland, and for various reasons thoughts of this impending trip filled me with great anxiety.

There are other details relating to my distress as well, but for the purposes of a public blog, I will only leave it at that. I only share this experience with you out of a desire to be at least somewhat transparent. I don’t want to gloss over the details of the trip and pretend as if I was happy the entire time. There were some rather difficult moments. Plus, if I didn’t share the distress, I couldn’t tell you what happened afterward.

During and after church I prayed for some solace. I felt spiritually guided to sit on a couch on the third floor of the church building (the Hyde Park building is taller than it is wide). A man walked past me toward the stairs. He soon turned around and asked “Were you waiting to talk to me?” I didn’t answer. He stood there for awhile with a kind smile. His appearance reminded me of a young Henry B. Eyring, a modern-day LDS prophet. He introduced himself as the stake president, which is a leader over several LDS congregations.

I took courage and told him briefly about my experience. I could tell that he was really listening to me and that he really understood. He said that he had traveled in countries where it was simply impossible to take the Sacrament, and that he felt that the Atonement of Jesus Christ was sufficient  for those living righteously to feel clean in such circumstances without the Sacrament. He believed that those circumstances extended to me. I knew what he said was true; I knew it before he said it, but the way he said it and the kindness behind the words made all the difference. I know God sent him to speak to me. It was a great tender mercy. For a time, I felt peace.

But the adventure wasn’t over. Oh no. Not by a long shot. Stay tuned for more Melanie fun in the next blog, “The Undesirable Adventure”.